Home / About Us / Our History

In the spring of 1980, a group of Santa Barbara donors and activists established the FUND FOR SANTA BARBARA to support organizations in Santa Barbara County working for progressive social change. The creation of the foundation and its success are due in large part to the efforts of Nancy Alexander and the founding board, consisting of Bob Bason, Bill Cirone, Nancy Franco, Ed Laing, Maryanne Mott, Dave Peri, Gary Sampson, and Kit Tremaine.

From 1980 through 1985, the FUND FOR SANTA BARBARA benefited from the fiscal sponsorship of the Liberty Hill Foundation of Los Angeles, a similar community-based foundation, which provided invaluable guidance during the organizational period. The Funding Exchange, a national network of progressive activist-led community-based funds, also provided technical assistance and support to the FUND. Consequently, the FUND grew from an idea to a functioning organization in the Santa Barbara community in a very short period of time.

In these early years, Nancy Alexander was the principal organizer, fund-raiser and (largely volunteer) staff member with substantial back-up clerical assistance from the Center for Community Education and Citizen Participation. 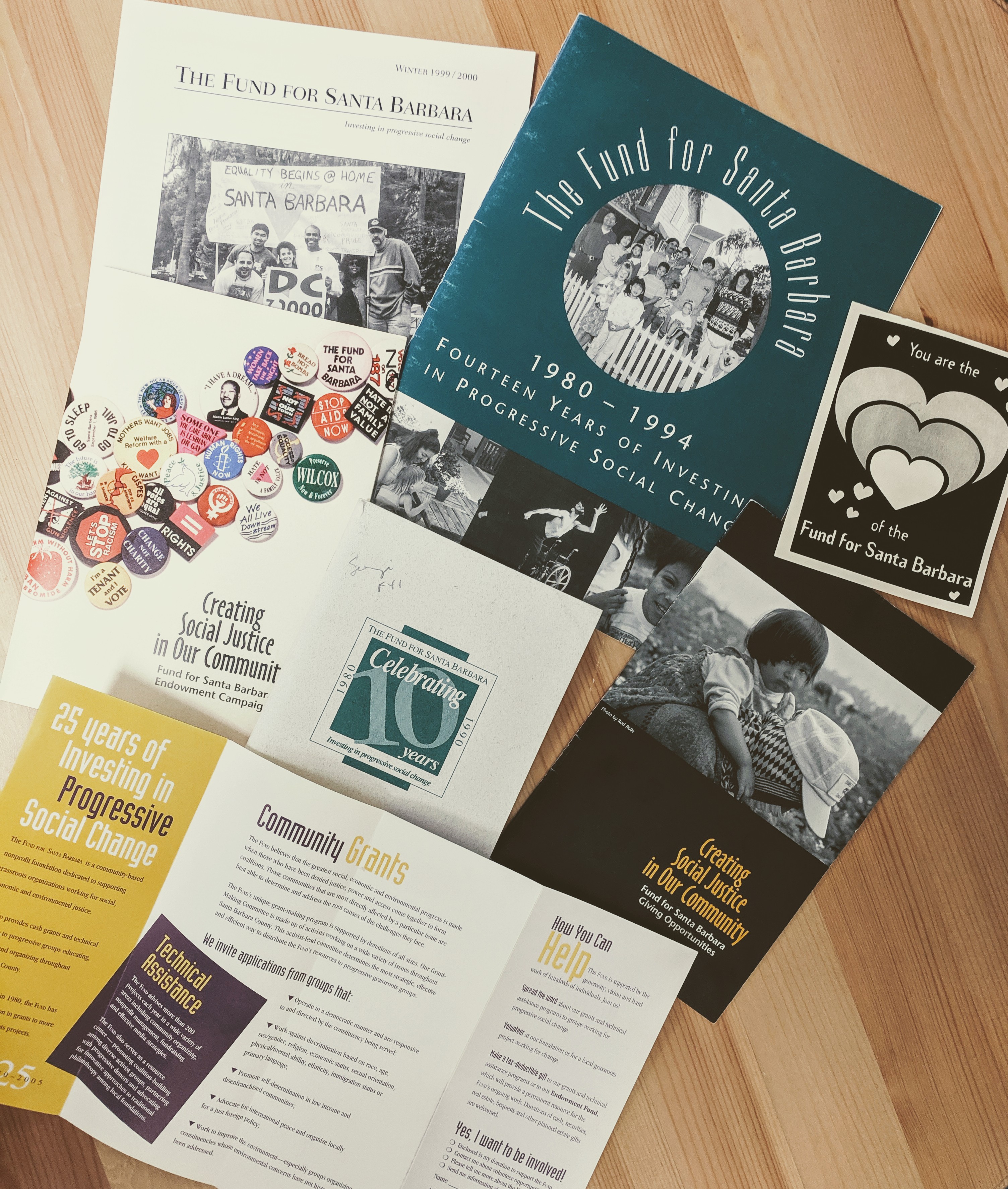 In the spring of 1983, in order to insure the foundation’s continuing development as a stable community institution, two new directions were initiated: (1) a paid part-time staff position was created, and (2) some members of the community were invited to serve on an advisory board which later became the Board of Directors.

In March 1985, the FUND FOR SANTA BARBARA became an independent 501(c)3 non-profit, no longer under the fiscal umbrella of the Liberty Hill Foundation. This was the beginning of a long planning process for the organization. During the years that followed, the number of directors increased, long-term development plans were put in place and the number of donor advised grant programs administered by the FUND grew. In 1988, the first full time executive director was hired.

In November 1990, the FUND celebrated its 10th year of grant-making in the community by hosting a dinner in honor of this accomplishment. Special recognition was given to Herman Warsh and Maryanne Mott for their generous and on-going support to the foundation.

An Endowment Fund for the Future, established by the Board in the Fall of 1992, has now grown to over $1.7 million dollars in cash and $1.5 million in future pledges and planned estate gifts.

In 1996, the FUND became an affiliate of The Funding Exchange, by then a national network of 15 foundations across the country. This connection brought many new resources to our foundation and community, including technical assistance and special grant making initiatives.

In 2000 and 2001, the FUND undertook a comprehensive evaluation and strategic planning process. One of the results of this was the spring 2003 implementation of a Multi-Year Granting Program allowing for the investment in long term sustainability in organizations the FUND has supported over the years.

In July of 2001, the northern Santa Barbara County Pilot Program was officially launched and the first staff member was hired specifically to work with northern Santa Barbara County Communities. Though the FUND began making grants in the Santa Maria Valley in 1998, the launch of this pilot program signaled the full organizational commitment to building a base of donors, activists and volunteers in the northern half of the county. An office was opened in Santa Maria in 2003.

The FUND became a Full Member of the Funding Exchange in June of 2004, giving the organization a vote at the national level in grant-making strategies and social movement-building.

In 2005, for the 25th anniversary of the FUND, a film was produced to document a quarter century of work and community-building.

In 2008 the Youth Making Change program was launched in order to give young people the opportunity to learn about philanthropy through the act of grant-making.

In 2011, The FUND is celebrating its 31st anniversary. Still using the motto of “Change, Not Charity” and committed to supporting grassroots work for social, economic, environmental and political change throughout Santa Barbara County, the FUND continues to grow. Each year, the Grant-Making Program distributes more than $250,000 and the Technical Assistance Program offers free consulting, training and support to more than 200 projects.

In 2016, the FUND expanded its important program work in North County by adding additional full-time staff to its Santa Maria office.

The effectiveness of the South County office was significantly improved in 2016 through a long-anticipated complete renovation, including a new enclosed conference room and individual offices, while preparing for a similar upgrade in the North County office.

That same year, the FUND completed its very first comprehensive financial audit. Alongside this effort, the FUND began undertaking a comprehensive strategic planning process to chart its development over the next five years.

In 2016, the FUND also kicked off its Latino Civic Leadership gatherings, bringing together over 200 young emerging and long-time established Santa Barbara Latino leaders for the purpose of growing and strengthening local Latino civic leadership and engagement.

Read more about our Mission & Vision.

Learn more about our Board, Staff, Grantmaking Committee, and Youth Making Change boards.