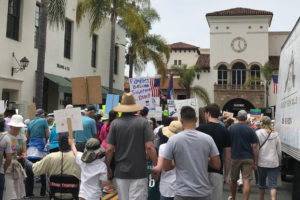 Published in the Noozhawk

Hundreds of protesters gathered at both ends of Santa Barbara County on Saturday as part of a nationwide demonstration against immigrant children being separated from parents being detained at the border.

The national protest movement, #FamiliesBelongTogether, was well-represented at De la Guerra Plaza in Santa Barbara as well as in Santa Maria.

The event featured speakers from a range of backgrounds.

A man who identified himself as Jonathan told the crowd that he was an immigrant and he appreciated the support for his community.

Gail Teton-Landis, chairwoman of the Democratic Party of Santa Barbara County, encouraged attendees to vote and volunteer in order to make changes in federal immigration policy.

Although the rally’s purpose was to protest family separations at the border, some speakers and attendees used the opportunity to lodge various complaints against President Donald Trump. There were signs protesting the ban on travel from several predominantly Muslim countries and others calling for Trump’s impeachment.

On June 20, Trump signed an executive order that halts the family separations but continues the “zero tolerance” policy mandating the criminal prosecution of those who try to enter the United States illegally.

Around noon, the protesters marched from De la Guerra Plaza and on to State Street, chanting slogans such as “No hate, no fear, immigrants are welcome here” and “Abolish ICE!”

They then marched down South Depot Street to West McCoy Lane, crossing Broadway and returning to the ICE site as passing drivers honked horns and Santa Maria police reminded protesters to remain on the sidewalks for their safety.

“The separation of children from parents and families is immoral,” said the Rev. Bob Islip of First United Methodist Church of Santa Maria. “It is simply evil. We denounce this no-tolerance policy.”

Islip recently attended a gathering of 400 United Methodist Church pastors, who voted to approve a resolution opposing the separation policy.

“What kind of statements are we making here? Are we not the home of the brave and the land of the free? Are we not about life and liberty and the pursuit happiness? These actions and policies instead show the world that we are intolerant, that we’re ignorant and belligerent.”

The Santa Maria event was organized by the Central Coast Alliance United for a Sustainable Economy (CAUSE) along with The Fund For Santa Barbara and Planned Parenthood.

Protesters called for the abolishment of ICE, with CAUSE’s Hazel Davalos reminding the crowd that the agency had arrested 160 people in Southern California this month, 22 of them in Santa Barbara County.

“The people who are being taken are our neighbors,” she said. “They are our co-workers. They are our students, our family members, our teachers, our community.

“Whether they have committed a crime or not, we will stand behind them because no person deserves to be punished twice, once by our criminal justice system and twice by the deportation machine.”

After Davalos told the crowd about the creation of the Santa Barbara County Immigrant Legal Defense Center to ensure immigrants have access to lawyers, one man offered a donation before passing her own hat for other financial contributions.

“We will continue making these demands until our community no longer has to live in fear of separation from their loved ones,” Davalos said.