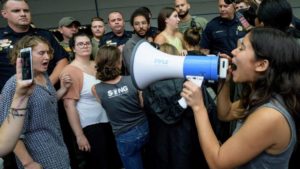 Published in the Tribune

Several protests are planned across San Luis Obispo County in opposition to the U.S. government’s “zero-tolerance” immigration enforcement policy that, until recently, included the separation of undocumented immigrants from their children.

Protests are planned for Arroyo Grande, Atascadero, Cambria, Los Osos, Morro Bay, Nipomo, Paso Robles and San Luis Obispo, beginning Thursday, June 21 and culminating with a June 30 rally in front of the San Luis Obispo County Superior Courthouse that is timed to coincide with a nationwide day of protest.

Though President Donald Trump signed an order Wednesday rescinding the family separation policy — in favor of housing families together at detention facilities — SLO County protest organizer Nancy Peck said in a Facebook post that there is still cause for public outrage.

“The drive that comes behind direct action is often like a dam bursting, of cumulative frustration over many issues. The immigration turmoil, treating persons with no respect and humanity, of separating children and parents, this does not get flipped off like a light switch,” Peck wrote. “Until each and every child is reunited with their parent, until the scars of separation of each child are healed, we will act.

For weeks now, the Department of Homeland Security, Immigration and Customs Enforcement and the U.S. Border Patrol have ramped up immigration enforcement as part of President Donald Trump’s zero-tolerance policy toward illegal immigration. All adult undocumented immigrants were charged with at least a misdemeanor offense, a departure from previous policy, and their children were taken to be housed at detention camps.

Public anger — 66 percent of Americans oppose the separation policy, according to a Quinnipiac University poll published Monday — intensified after the government released photos of cages which are used to house large groups of children together; notably, the photos depict only male children. The government has not disclosed where the female children are detained.

Then, on Monday, ProPublica published a nearly eight-minute audio clip of children crying as they were being separated from their parents, while a Border Patrol agent could be heard joking in Spanish that “Well, we have an orchestra here.”

The government response to the outcry has been inconsistent: Attorney General Jeff Sessions has said the policy of family separation is intended to be a deterrent, while Homeland Security Secretary Kirstjen Nielsen has falsely stated that there is no policy of family separation. In a series of Tuesday tweets defending his immigration policy, Trump wrote thatundocumented immigrants “infest our country.”

Then, on Wednesday, Trump reversed his previous statement that the separation policy could not be ended by executive order by signing an executive order.

The pushback to the government’s approach has come not just from liberal protest groups such as MoveOn.Org, which is spearheading the June 30 national protest, but also from former government officials like former CIA Director Michael Hayden — who likened the child detention centers to Nazi concentration camps — and conservative writer Bill Kristol, who tweeted that Trump’s comments about undocumented immigrants “probably sounds better in the original German.”

Peck, who co-runs the Facebook group “Central Coast Progressive Movement,” was the driving force behind many of the local protests.

She said she was spurred to action by what she saw online; she’s received help from the group Women’s March San Luis Obispo, which has sent the protest plans to its 7,000-member email list also to its 4,000 Facebook followers.

“That’s all there is on social media,” she said. “Father’s Day was Sunday and I just felt sympathetic about the children who were separated from their parents.”

Peck said she didn’t want to wait til June 30, the national day of action, to begin the protest. So, with the help of other local groups, she was able to coordinate the following protests:

In addition, the Central Coast Coalition for Undocumented Student Success plans to protest the policy and pass out fliers at 6 p.m. Thursday, June 21, at the San Luis Obispo Farmers Market, and the Democrats of San Luis Obispo Club will hold a protest and phone bank at Trader Joe’s in San Luis Obispo, 3977 Higuera St.

On June 30, the MoveOn.org rally is scheduled to begin 10 a.m. in front of the SLO courthouse downtown. A second rally is planned for 11 a.m. in Nipomo, at the intersection of Tefft Street and Frontage Road.