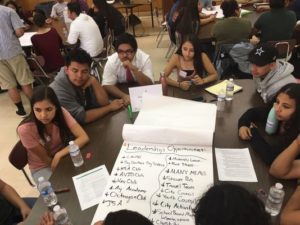 Published in the VC Star

Denise Mondragon, 18, started things off by asking the roughly 100 students if they had heard about Measure T. About a quarter of those sitting in the cafeteria at Santa Paula High raised their hands.

Measure T, the Santa Paula High senior explained, is a 1-cent sales tax city voters approved in 2016. Along with police, fire protection and roads, the new money was designed to boost youth services. The question for the enthusiastic crowd gathered Thursday was: On what should it be spent?

Money for youth services: Santa Paula youths sought study; they got one, but …

The students, broken up by table, quickly got to work. They started listing attributes of what makes someone successful. They included unity, love, family, fitness, money, hard work, peace, music, art, culture.

“Nutrition. You need to eat well to be well,” said one participant as the rest at the table clapped their approval.

The next exercise got to the heart of what they hope to bring to Santa Paula city staff and elected officials, and that’s a list of the needed and wanted programs and services for their young population. As identified by them.

“We wanted to have our own agenda and our voice,” Mondragon said.

The town hall meeting was organized by the Santa Paula Youth Chapter of the Central Coast Alliance United for a Sustainable Economy (CAUSE), along with 10 clubs from the school. The goal was to gather input on what city spending would look like in year two of the new tax when it comes to their population.

In the current budget, Santa Paula set aside $365,000 for youth spending. The council on a 4-1 vote agreed to hire a recreation supervisor and a recreation coordinator, expand summer camp, add movies in the park, offer four field trips per year and add after-school programs and other classes.

The city also recently hired RRM Design Group to perform a needs assessment. Thursday was the group’s first day on the job, said Tony Tomasello, a senior planner who attended the town hall meeting. Over the weeks and months ahead, the group will do a survey, meet with stakeholders, conduct interviews and hold workshops. The goal will be to “distill it down into something the decision-makers can use,” he said.

Paloma Mora, 18, heard about the town hall meeting in her economics class. What she wants to see is a little of everything.

“Better overall opportunities for students and parents,” she said.

Mora said she’d love to see a community garden, which would give those who live in apartments with little outside space the opportunity to be outdoors.

As an artist, Mora said she’s had chances to work and learn about her field, showing her work at the Santa Paula train depot and working with the city’s art institutions. In the fall, she’ll start at the Academy of Art University in San Francisco.

City Council member Jenny Crosswhite praised the students gathered for their effort. When she was their age, she couldn’t have imagined doing something similar, she said.

“I didn’t think that anyone would ever want to listen to what I had to say,” she told them.

For Crosswhite, an internship in graphic design at age 14 exposed her to what would ultimately become a career. Several students on Thursday included internships on their wish lists.

Council member John Procter, who handled sound for the event, was impressed by the vitality in the room. The teens were really “shaming the adults” with their involvement, he said.

“You’re seeing so much energy,” he said.

Ocil Herrejon, a Santa Paula youth organizer with CAUSE, said the event was “really beautiful. This is youth that really care about the community and their future.”

Using the Remind app, students were asked to choose their top three priorities of the dozens identified. With that information, members of CAUSE will prepare a report to deliver to city officials.