Home / Grantee Spotlight / The “Right to Write” Your Loved Ones 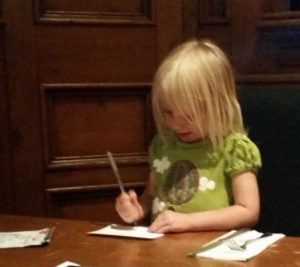 Over 65% of people released from California’s prison system return within three years, according to the California Department of Corrections and Rehabilitation. While recidivism rates vary by state, California’s is among the highest in the nation. In Santa Barbara County, the recidivism rate is 71%.

This negatively impacts the community in several ways, one of which is financially – the cost of re-incarcerating ex-prisoners who commit new offenses is $31,286 per prisoner annually, according to the Vera Institute.

In April 2013, the Santa Barbara County Jail created a prohibition on letters in envelopes to inmates, enacting a postcard only policy. Sherriff’s officials reported that the ban was in response to an increase in contraband found in envelopes. According to County files, there were two reported cases in 2010, five in 2011, and eleven in 2012.

Mariah Klusmire, an SBCC student inspired by the Catholic Worker Movement, says the “Right to Write” campaign started in her living room in Lompoc when a friend of hers reported that his girlfriend could no longer receive letters. As a result, they “got angry and then got organized,” says Anni Telfer, a fellow organizer.

Mariah, Anni and other Lompoc activists affected by the new policy began to organize via social media. Marissa Garcia said she was “frustrated and upset” when letters to her husband were returned to her by the Santa Barbara County Jail. She learned about Right to Write on the Facebook Occupy page. This is how Marissa, a self-described “Chicana activist from Santa Barbara’s Westside neighborhood,” met “poor, white, working class activists from Lompoc,” says Mariah. Together they created a countywide grassroots campaign to reverse the mail ban.

Studies show that prisoners who maintain close contact with their family members while incarcerated are less likely to relapse. Research from the American Correctional Association noted that “Those without positive, supportive relationships are more likely to engage in criminal behavior.”

Right to Write organizers started coordinating a letter writing campaign in the jails. “We collected over one hundred letters from inmates,” says Mariah. Prisoners reported that they missed seeing their children’s school progress reports, wedding invitations (even if they couldn’t attend), and their children’s drawings. “It was not only taking away basic human rights” says Marissa, “this policy was hurting children.”
“Prison inmates who have more contact with their families are less likely to be re-incarcerated” (Vera Institute).

By fall of 2013, the organizers started working with attorneys from the American Civil Liberties Union (ACLU) Southern California, and the Prison Legal News (PLN), a project of the non-profit Human Rights Defense Center.

In the spring of 2014, Right to Write received a grant from the Fund for Santa Barbara to help pay for mileage and printing expenses related to their organizing work. “We’re poor students, we have to work, we couldn’t afford gas money to drive around the County anymore; this grant helped reinvigorate our efforts,” says Mariah.

When the organizers heard the news “we didn’t believe it at first,” said Mariah. “Rumors are common in the jail.” Marissa said, “I couldn’t get answers, but when I tried sending my husband a letter and it worked…I felt like a kid at Christmas knowing how many parents in jail could get letters from their children again.” After a year-and-a-half, the letter ban was lifted.

Mariah, Marissa, Anni and other Right to Write members continue to advocate on criminal justice issues. Regarding what is next, Marissa said they “want to ban this policy on a state level”.